A penalty kick is awarded if a player commits a direct free kick offence inside their penalty area or off the field as part of play as outlined in Laws 12 and 13.

A goal may be scored directly from a penalty kick.

The ball must be stationary on the penalty mark and the goalposts, crossbar and goal net must not be moving.

The player taking the penalty kick must be clearly identified.

The defending goalkeeper must remain on the goal line, facing the kicker, between the goalposts, without touching the goalposts, crossbar or goal net, until the ball has been kicked.

The players other than the kicker and goalkeeper must be:

After the players have taken positions in accordance with this Law, the referee signals for the penalty kick to be taken.

The player taking the penalty kick must kick the ball forward; backheeling is permitted provided the ball moves forward.

When the ball is kicked, the defending goalkeeper must have at least part of one foot touching, or in line with, the goal line.

The ball is in play when it is kicked and clearly moves.

The kicker must not play the ball again until it has touched another player.

The penalty kick is completed when the ball stops moving, goes out of play or the referee stops play for any offence.

Additional time is allowed for a penalty kick to be taken and completed at the end of each half of the match or extra time. When additional time is allowed, the penalty kick is completed when, after the kick has been taken, the ball stops moving, goes out of play, is played by any player (including the kicker) other than the defending goalkeeper, or the referee stops play for an offence by the kicker or the kicker’s team. If a defending team player (including the goalkeeper) commits an offence and the penalty is missed/saved, the penalty is retaken.

If, before the ball is in play, one of the following occurs:

the player taking the penalty kick or a team-mate offends:

except for the following when play will be stopped and restarted with an indirect free kick, regardless of whether or not a goal is scored:

a team-mate of the goalkeeper offends:

a player of both teams offends, the kick is retaken unless a player commits a more serious offence (e.g. ‘illegal’ feinting);

both the goalkeeper and the kicker commit an offence at the same time, the kicker is cautioned and play restarts with an indirect free kick to the defending team

If, after the penalty kick has been taken:

the ball rebounds into the field of play from the goalkeeper, the crossbar or the goalposts and is then touched by an outside agent: 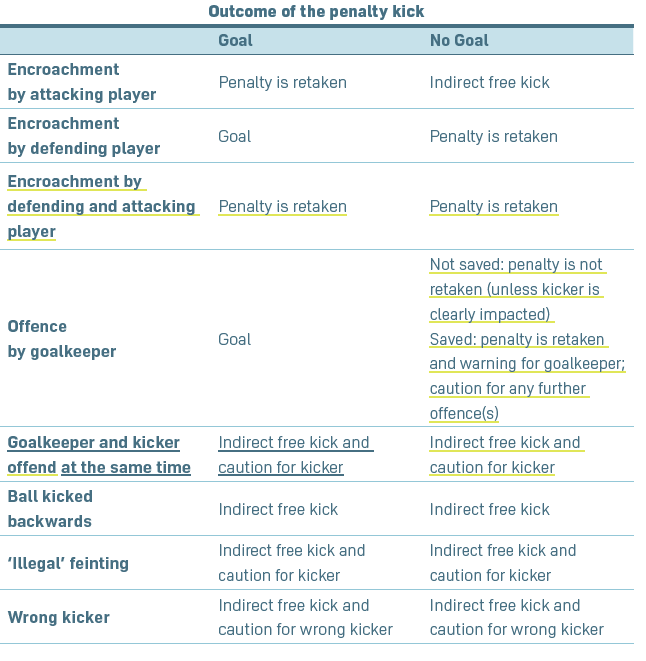