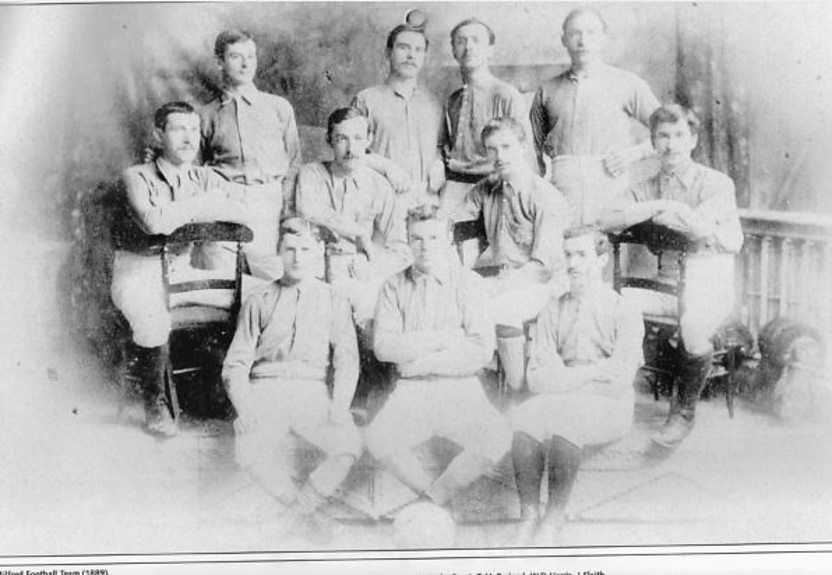 In 1932 an obituary appeared in an Armagh newspaper reflecting on the life of a highly respected local citizen and businessman. In it, a certain William Mc Crum of Milford was lauded as a brilliant scholar, storyteller and outstanding sportsman. Nothing unusual about that if it had not contained a reference to the fact that the deceased had been the inspiration behind one of the most momentous changes to the Laws of Football.

Mc Crum came from a highly respected family. The only son of Robert Garmany Mc Crum, a linen baron who built Milford, he was a former pupil at The Royal School, Armagh and graduated from Trinity College, Dublin in 1886. Affectionately remembered in the village as ‘Master Willie’ he was a sportsman of international recognition. He was instrumental in forming the Milford Cricket Club devoting much time and effort to coaching. Throughout his life he always maintained a keen interest in the Boy Scout Movement. He was also specifically interested in Amateur Dramatics and was the driving force behind The Milford Players. When the R.G. Mc Crum Institute – built by his father to service the recreational needs of the village – opened in 1914 he became actively involved in the running of it, encouraging all villagers to take part in some or other recreation. He was a brilliant raconteur and author of some very meritorious sketches. As one of the managing directors of his father’s linen manufacturing business, Mc Crum, Watson and Mercer, he represented the company’s interests in London for a number of years. He spent the best part of his life, however, in Milford.

The obituary on Mc Crum paints a picture of a person who was a gentleman from head to toe and who was obviously tired of seeing footballers resorting to all kinds of illegal methods. The trend became a thorn in his flesh as the years went by. In football, only the ball was intended to be kicked, not the player. Anyone who refused to respect this deserved to be threatened with a deterrent which would punish not only the offender but his whole team as well.

William Mc Crum was not a daydreaming zealot and advocator of old-fashioned ideals. He was a goalkeeper for Milford, a small village club that played in the Irish Championship’s first season in 1890-91. As a goalkeeper Mc Crum had every opportunity to witness the way in which the purity of sport was being corrupted by foul play. He had felt firsthand the effects of breaches of the rules and similar unsporting behaviour on the field.

The penalty kick, of course, is the kind of penalty that only a goalkeeper could have invented, a supreme moment of drama and self-sacrifice that places the goalkeeper, generally a bystander, at the centre of the stage. Yes, it stacks the odds against the goalie, but it does make him, heroically, even tragically the star of the show. Mc Crum’s love for the theater and theatricals may have prompted him to come up with the idea. He also held an influential position in the Irish Football Association and had a flair for administration and politics, without which his revolutionary idea would hardly have been implemented.