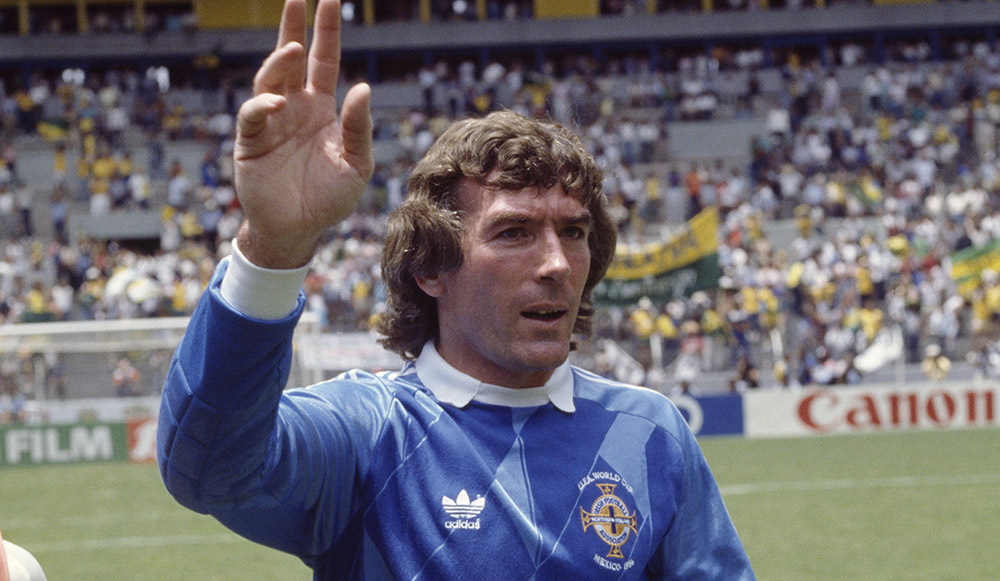 Patrick Anthony Jennings OBE was born June 12, 1945 in Newry, Co. Down, N. Ireland and is a former goalkeeper. He played 119 games for Northern Ireland, a figure which at the time was a world record (and is incidentally still a Northern Ireland record), in an international career which lasted for over 22 years. Jennings is considered one of the greatest goalkeepers of all time. During his career Jennings played in over 1,000 top level games, and even managed to score a goal in the 1967  Charity Shield match. What was even more spectacular about it was that he scored the kick from his hands—sending a large punt down the field that bounced over Manchester United goalkeeper Alex Stepney and landed in the net.

Jennings began his playing career with his hometown side Newry Town as a sixteen year old. After impressing with the team he moved to English Third Division side Watford in May 1963. Jennings again impressed in his first season in English football, as he played every league game for his club, and was bought by Spurs for £27,000 at the end of it. Jennings spent thirteen years there, where he played in 472 league games for Spurs. He won the FA Cup in 1967, the League Cup in 1971 and 1973, and the  UEFA Cup in 1972. In 1973 the Football Writer’s Association named him as its footballer of the year, three years later he won PFA’s version of the award. He had made 591 appearnces for Spurs.

In August 1977, he was sold to Tottenham’s arch-rivals, Arsenal, with Spurs thinking he was nearing the end of his career. However, Jennings saw off rivals for the goalkeeper’s jersey to play for Arsenal for another eight years. Whilst at there, he helped Arsenal to three successive FA Cup finals, in 1978, 1979, and 1980. However, Arsenal only managed to win the second of these finals, a 3-2 victory against Man Utd. In total, Jennings made 327 appearances for Arsenal, 237 of them in the League, between 1977 and his eventual retirement from first-team club football in 1985.

He guested for Shamrock Rovers in a testimonial for Shay Brennan shortly after the World Cup in 1986.

Jennings made his Northern Ireland debut as an eighteen year old, whilst playing for Watford. This game was on the 15th of April 1964, and was a British Home Championship match against Wales, Northern Ireland won the game 3-2; George Best made his international debut in the same game. Jennings played his final international game on his 41st birthday, having returned to Tottenham Hotspur six months earlier, playing in their reserve side to maintain his match sharpness. This game was Northern Ireland’s final group game in the 1986 World Cup, and was against Brazil, Brazil won the game 3-0. This was Jennings’s second World Cup, he had previously played in the 1982 World Cup.

Following his retirement Jennings has worked as a goalkeeping coach. He has worked at Spurs in this capacity since 1993. In 2003 Jennings was inducted into the English Football Hall of Fame in recognition of the skills he demonstrated in the English league.

His son, also named Pat, is also a goalkeeper. He has played forEircom League clubs UCD and is playing for Derry.

You can purchase his autobiography by clicking here: Pat Jennings: An Autobiography. London, Willow Books, ISBN 0-00-218069-3.