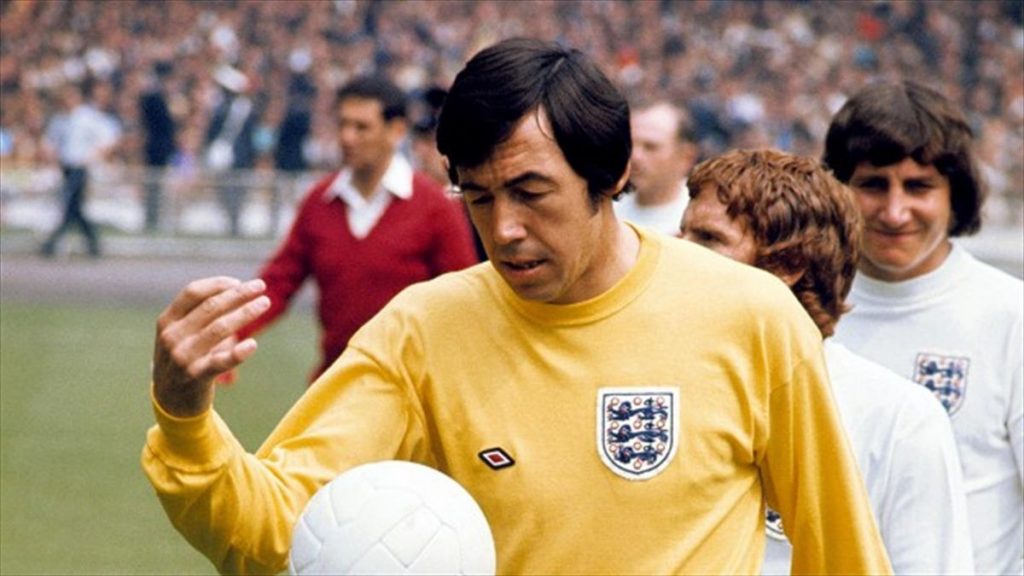 Gordon Banks, OBE (born 30 December 1937 in Sheffield, South Yorkshire, England) is a former English footballer, elected in a poll by the IFFHS as the second best goalkeeper of the 20th Century – after Lev Yashin.

Banks was a member of the England national team that won the 1966 World Cup. Banks was named by Pele as one of the top 125 greatest living footballers in March 2004.

Banks, born in Sheffield, was a careful student of goalkeepers during childhood. Banks played in local colliery football as a boy and was offered an apprenticeship by Chesterfield after initially going to work as a coal bagger and then as a bricklayer on leaving school.

After performances in the youth and A teams gained him promotion to the reserves, Banks was posted to Germany with the Royal Signals on National Service, winning the Rhine Cup with his regimental team. On his return he was offered a full-time contract by the Chesterfield manager, Ted Davison.

He reached the two-legged final of the FA Youth Cup with Chesterfield in 1956, losing 4-3 on aggregate to the Man Utd team of the famous Busby Babes. He made his debut for the first team at home in November 1958 against Colchester United in the newly formed Third Division. He played just 23 games for the club before First Division Leicester City offered Chesterfield £7,000 in the summer of 1959.

Banks’ career started to rise rapidly from this point. After 4 games for the reserves, he replaced the injured Dave McLaren for his Leicester City debut in a 1-1 draw against Blackpool on 9 September 1959 and retained his place for the 2-0 defeat against Newcastle 3 days later. With McLaren fit again, Banks was sent back to the reserves but, after the first team conceded 14 goals in the next 5 games, he was recalled and became the first-choice goalie for the remainder of the season.

In 1961, Leicester City beat Sheffield United to reach the FA Cup final at Wembley, the first of three they would manage that decade. Their opponents were Tottenham Hotspur, who were a cut above everyone else having won the 1st Division title with ease and style. Banks played well, but with the right back Len Chalmers carrying an injury, was powerless to prevent second half goals from Bobby Smith and Terry Dyson giving Spurs a 2-0 win and the first “double” of the 20th century.

At the time, Ron Springett was the goalkeeper for England, but after the 1962 World Cup in Chile, a new coach was appointed in former England right back Alf Ramsey. Ramsey demanded sole control of team and began looking towards the next World Cup. He knew that he just needed to find a squad for the final stages as England were hosting the event and didn’t need to undergo a qualifying campaign. In goal, Banks was checked out by Ramsey for the first time in April 1963 against Scotland at Wembley. Though England lost 2-1, Banks gained plaudits and Ramsey was pleased with his performance. He played in 13 of the next 15 internationals, including a 1-1 draw against Brazil.

Meanwhile, a month after his international bow, Banks was back at Wembley with Leicester for another FA Cup final, this time against Manchester United. United were looking for their first trophy since the Munich air disaster of five years earlier which had claimed the lives of eight of the Busby Babes whom Banks had faced as an adolescent. Banks failed to hold a Bobby Charlton shot from distance which gave a chance to David Herd. After that things got worse for England’s newest keeper, when Denis Law wrongfooted Banks with a smart shot on the turn to put United 2-0 ahead. After Leicester had pulled one back through a diving header from Ken Keyworth, Banks leapt high in the air to claim a high cross from Johnny Giles, only to drop the ball at Herd’s feet. Herd scored his second to conclude a 3-1 win.

In 1964, Banks had some domestic success when Leicester beat Stoke City 4-3 in the League Cup final over two legs, though they lost the trophy a year later after a 3-2 defeat by Chelsea on aggregate in the final.

By 1965, Banks was indisputably the first-choice England goalkeeper. He was settling into the form of his life which would last for the next seven years; agile and alert, he was frequently seen making amazing reflex saves and possessed flawless positional sense and reading of attackers’ movements and instincts.

His place in the starting line-up was secure as the World Cup approached; that said, one of his most famous stories tells of how he casually said “See you Alf!” to his England boss after one get-together ended, only for Ramsey to reply “Will you?”

When the World Cup began, Banks was in goal as England got through their group containing Uruguay, Mexico and France, drawing 0-0 with the former and clinching 2-0 victories over the latter. Banks wasn’t greatly tested, but it was hugely encouraging that he emerged from the group with three clean sheets from three games, a trend that continued when England beat a physical Argentina side 1-0 in the last eight, with Geoff Hurst scoring with a header.

Bobby Charlton scored twice in the semi final against Portgual before a late penalty was conceded by Jack Charlton handling the ball. Banks was finally beaten after 43 minutes when Eusebio put away the spot kick to his right. That said, England had won 2-1 and were in the final, where West Germany awaited.

It was England who dominated the final but it was Banks who was beaten first. A weak header from Ray Wilson handed a chance to Helmut Haller whose shot wasn’t fierce but was on target and needed dealing with. Banks thought Jack Charlton was going to clear; Charlton in turn thought Banks had it covered. Neither went for it as a result, and the ball crept in the corner. England equalised through a Geoff Hurst header within six minutes and went ahead late in the second half through Martin Peters.

Banks had little to do during the second half but his known powers of concentration were required when Jack Charlton gave away a dubious free kick 30 yards from goal. Banks duly organised a defensive wall and got into position. Lothar Emmerich slammed the ball into the wall, the ball ricocheted across goal and Banks struggled to follow it across his six yard box, such was the speed and unpredictability of its movement as it took deflections and swipes. Ultimately German defender Wolfgang Weber reached it at the far post and swept it into the net with Banks diving in vain to get his palms to the ball. The final whistle went seconds later to send the game into extra time.

England took the lead in extra time with that hotly debated third goal from Hurst. Banks not troubled again until the final minute, when he saved a shot from Siggy Held and moments later could only watch as Uwe Seeler lunged for the ball and missed. Hurst then scored his hat-trick goal and the game was over. Gordon Banks had 33 England caps and was a world champion. But his career at club level was shortly to take an interesting and unexpected turn.

Playing at pace, Brazil were putting England under enormous pressure and an attack was begun by captain Carlos Alberto who sent a fizzing low ball down the right flank for the speedy Jairzinho to latch on to. The Brazilian winger sped past left back Terry Cooper and reached the byline. Stretching slightly, he managed to get his toes underneath the fast ball and deliver a high but dipping cross towards the far post. Banks, like all goalkeepers reliant on positional sensibility, had been at the near post and suddenly had to turn on his heels and follow the ball to its back post destination.

Waiting for the ball was Pele, who had arrived at speed and with perfect timing. He leapt hard at the ball above England right back Tommy Wright and thundered a harsh, pacy downward header towards Banks’ near post corner. The striker, one of the world’s greatest, shouted “Goal!” as he connected with the ball. Banks was still making his way across the line from Jairzinho’s cross and in the split-second of assessment the incident allowed, it seemed impossible for him to get to the ball. He also had to dive slightly backwards and down at the same time which is almost physically impossible. Yet he hurled himself downwards and backwards and got the base of his thumb to the ball, with the momentum sending him cascading to the ground. It was only when he heard the applause and praise of captain Bobby Moore and then looked up and saw the ball trundling towards the advertising hoardings at the far corner, that he realised he’d managed to divert the ball over the bar – he’d known he got a touch but still assumed the ball had gone in. England were not being well received by the locals after cutting comments made about Mexico prior to the tournament by Ramsey, but spontaneous applause rang around the Guadalajara, Jalisco stadium as Banks got back into position to defend the resulting corner. Pelé, who’d begun to celebrate a goal when he headed the ball, would later describe the save as the greatest he’d ever seen.

Brazil still won 1-0 – Jairzinho guided a shot past Banks in the second half – but England missed chances to get something, with Jeff Astle infamously putting the ball wide of an open goal and Alan Ball striking the crossbar. England ultimately joined Brazil in the last eight after a win in the final group game against Czechoslovakia. The reward was a rematch of the 1966 final against West Germany.